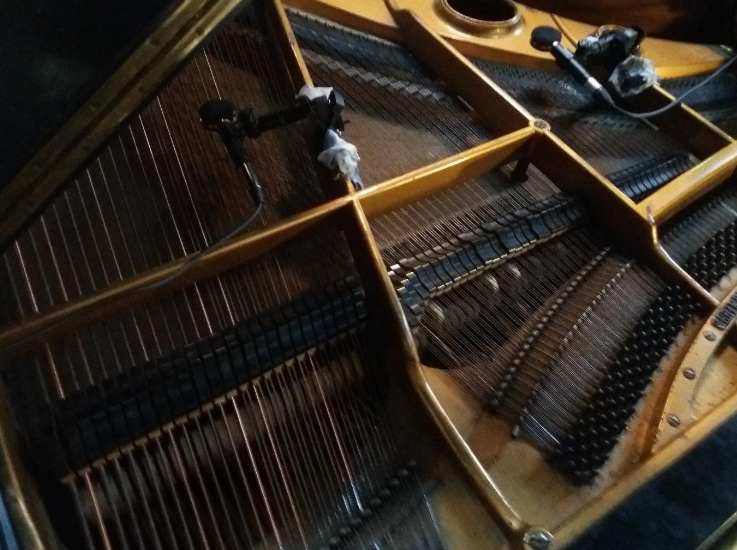 Recently I was tasked with recording our director Juan Rezzuto ‘s Haydn piano concert that took place at St. Cuthberts Church on 24th March 2018. This concert featured two pieces: Sonata for Piano and Violin No. 4 in A, and Piano Concerto No.4 in G. Accompanying Juan Rezzuto was Bejar Rodriguez on Violin and Sabrina Curpanen on Piano.

The main challenges that faced me were how to capture the best source sound without compromising the musician’s performance, dealing with a limited number of microphones and making sure that all the audio captured would be able to be synched in post-production. The equipment available to me was a pair of Audix scx25a microphones, a Behringer C-3 microphone, a Zoom H4N handheld recorder with built in microphones, an Audient ID14 audio interface and a Macbook Pro. As Juan’s piano was to be the lead instrument I focused on capturing the best sound for it that was possible. I used the pair of Audix scx25a mics as a stereo pair inside the piano to capture the entire spread of the piano and to minimise other sounds leaking into these mics. I used the Behringer C-3 mic to capture the violin and then later the second piano. To get the most of out of this microphone when miking up the violin I set its polar pattern to cardioid so that it mainly picks up what is in front of it, I placed the back of the mic facing the piano so that it rejected the piano sound. When miking up the second piano I did a similar thing by facing the back of the microphone towards Juan’s piano so that it rejected the sound of that piano. Finally, I used the built-in microphones in the Zoom H4N handheld recorder to capture the ambience of the entire concert, the H4n was placed in front of the two pianos to do this.

The other issue that I had to address was how the audio would be able to be synched with the film footage in post-production. As I was recording the microphones on two separate devices (the Zoom H4N and the Audient ID 22), and there were cameras filming, the audio would be out of synch as it is impossible to press record at the exact same time on multiple devices. To combat this issue, I performed a single loud clap in-between each movement, this loud clap would serve as a reference point for each of the files to be synched to.

To see and hear the finished result of these recordings please refer to the videos below of the Piano Concerto No.4 in G.